Medu Art Ensemble (Medu) was a cultural association operating in Botswana and was initiated by Dr Wally Serote on his return to Botswana after a period of study in the USA. Medu, a resistance front, following discussions between Dr Mongane Wally Serote, Johnny Makathini and Keorapetsi William ( Willie ) Kgositsile - all members of the ANC- in New York and Paris in the mid-seventies. Medu, which means ‘roots “ in Sepedi,  as its name suggested, grew organically. It was established in the aftermath of the Soweto uprisings by members of the disbanded Pelandaba Cultural Effort and Dashiki, the two  previously having fused into Tuka Cultural Unit. Medu drew heavily on the experience of these disbanded associations and continued to be a forum for co-operation between South African exile and Botswana artists. 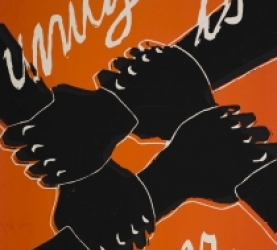 Condemning apartheid through poems and images was therefore a common means of expression for these artists and writers. Medu was initially for Black artists with an embargo on White artists and foreigners. In 1979, after huge debates, Medu members adopted the Freedom Charter beliefs. They agreed to open its membership to all who identified with the struggle of the oppressed people of South Africa.  Medu’s aims were also in line with the ANC policy.  Sergio-Albio Gonzalez and Teresa Devant were the firstWhites and international artists who joined the group. Soon others followed, although this shift in policy alienated some BCM and PAC members who were part of Medu.  Funding was received from a variety of overseas bodies, e.g. Sweden, Denmark, Norway and others. The underground funding came from the ANC underground structures based at their headquarters in Lusaka.

During the time of the formation of Medu in Botswana, violent military activities were the order of the day in Southern Africa. Struggles for independence and assertion for national identity were underway in Namibia and Zimbabwe, while civil war fueled by foreign interests was shaking Angola. All countries in the region, from Tanzania to the Congos, were involved in one way or another in the political instability and intimidation derived from the policies and actions dictated by the apartheid government

Its primary goal was to create a cultural front against the apartheid regime, although it had to balance this goal within the parameters of Botswana’s Law. Local students and exiles set up exhibitions music and theatre performances at the University of Botswana and the National Museum and Art Gallery of Botswana (NMAG). In this way Medu, managed to train Botswana nationals and exiles in the above mentioned skills.

The items in this collection were designed and produced - by the Graphic Art Unit of Medu to which Sergio-Albio Gonzalez, the donor of the collection, was a member.  The authenticity of these documents have been tested beyond reasonable doubt as these posters have been exhibited in South Africa, continentally and internationally. In October-December 2009 these posters and other materials were used for an exhibition put up jointly by Botswana National Museum and the French Embassy. Since there are still survivors of the MEDU Art Ensemble the authenticity can be backed up by interviewing the survivors. Among the people that can be interviewed are Rona Segale (Thami‘s wife), Dr Wally Serote (Founder of Medu) ,Ms.  Baleka Mbethe (Speaker of Parliament & Former South Africa  Deputy President)  Prof Kgotsisile, Barry Gilder and others.

This collection has both locally and internationally significance because the South African Liberation Struggle had sympathizers all over the world where they were granted political asylum. This is evident in that members were firmly grounded in African’s national liberation culture and admired the rich heritage of Sekou Toure, Almilcar Cabral, Ngugi wa Thiongo and Wole Sonyika. Medu also drew upon images and concepts from other revolutions worldwide. While both the colonial and apartheid regimes rigorously banned printed material produced by foreign revolutionary movements some did find its way into Medu collection. South African artists in exile or travelling abroad ( including several who trained in Cuba, Eastern Europe and Soviet ) absorbed the iconography, styles and aesthetic approaches that characterized “art of revolution”. Sometimes, South African artists reinterpreted, extended and adapted international images to describe their own circumstances of the struggle. Medu members studied, and engaged with revolutionary artwork ranging from Harlem Renaissance poet Langston Hughes, to German play writer, poet and critic Bertolt Brecht and Mexican muralists Diego Rivera, Jose Orozco, Davis Siqueiros and painter Frida Kahlo

From the history of its establishment Medu has proven to be of worldwide significance, and unique. As Medu was formed in Botswana, the government of Botswana was very sensitive to the formation of this South African cultural group that was active in Gaborone. It overtly declared that no political or military activities against South Africa would be sanctioned within its territory. The government of Seretse Khama found itself walking a tightrope, showing solidarity with the struggling peoples of a brother country by denouncing the apartheid regime, while acting cautiously at the South African heavy stick. Medu’s founders were aware of the fragile position of the host government and carefully planned the Ensemble’s activities so as to avoid serious reprisals or endangering its own existence. One way of proving Medu’s  legitimacy as a cultural group therefore was allowing any citizen, Motswana or  expatriate, to join its units and train in any of the particular disciplines on offer .

In July 1982 Medu organized the Culture and Resistance Symposium and Festival of Arts held in Gaborone. The Culture and Resistance Symposium was made up of three components – the exhibition Art Towards Social Development; the Culture and Resistance Symposium and the Festival of the Arts. The exhibition and the symposium were also important because they created the opportunity for South African artists to meet cultural workers from all over the world. Among International artists were Abdullah Ibrahim from New York; Lindiwe Mabuza, Johnny Diani and Lefifi Tladi from Stockholm; Gavin Jantjies from Germany; George Hallet and Pam Hartog from Zimbabwe and others. Diplomatic representations from different embassies in Gaborone were also present.  Medu decided to keep a low profile following the successful symposium. The tremendous success of the symposium brought Medu to the attention and scrutiny of Botswana’s authorities, and no doubt to South Africa’s too.

Medu attempted to minimize the risk of intervention into the Ensemble’s activities, and six months later decided to organize a conference, The Cultural Voice of Resistance in Amsterdam. This conference gathered Dutch anti-apartheid activists, ANC representative from several countries and MEDU members. The visit to the symposium by Co Derr resulted in an agreement to send part of the exhibition Art Towards Social Development to Stockholm. Artworks, posters and photographs were shown in Stockholm and Goteborg in 1984.  The success of the Symposium resulted in the establishment of the ANC’s Department of Arts and Culture in Lusaka. It further produced a boost to relations between artists and organizations within South Africa, tightening the cultural boycott and facilitating dialogue between the overseas and home activists and artists at a personal level. The Symposium on Culture and Resistance was important not only because it placed culture on the forefront of resistance to Apartheid but also because it allowed participants to envisage a role for culture in a liberated South Africa.

On 14 June 1985, South African Defence force (SADF) carried out a raid in Gaborone. The South African Security Police had provided SADF with detailed information on the targets identified as ‘dangerous MK militants’. Amongst the 12 people who were killed four – Thami Mnyele, Mike Hamlyn, George and Lindi Phahle –  were Medu members. After the Botswana Raid, Medu disbanded and many of it its surviving members left Botswana. Other noteworthy South Africans who were part of Medu are Ms. Baleka Mbethe (former Deputy President of South Africa), Mr. Willy Kgositsile, Tim Williams, Jonas Gwangwa, Professors Patrick Fitzgerald and, Heinz Klug, Basil Jones and Adrian Kohler.

We can safely conclude that this  is a rare collection that cannot be imitated since there was only  ONE  Medu  that existed at that time (South Africa Apartheid) and space (Botswana). There are no chances of duplicating since the main aim was resistance through culture. South Africa is liberated now and therefore Medu has accomplished its mission and much as it was disbanded we shall keep it “alive “ through the exhibitions

Albio Gonzalez was born in Cuba and after settling in Sweden as an adult, he was involved in designing posters for the Swedish – Cuban Friendship Association. During his stay in Cuba he noticed how effectively posters and billboards could produce a political message. Albio was responsible for setting up poster production for Medu’s graphic unit. This also bears testimony to the authenticity of the posters as they were developed by Albio, who   is in close contact with Freedom Park and can be  available if  further  verification  is needed. He visited German artist Petra Rohr-Rouendaal for acquiring the necessary equipment and technical expertise that he later transferred to Medu members. During his time of involvement with Medu, Albio was working for the Swedish Aid Mission (Sida) as a senior Planner in the Department of Town and Regional Planning in Botswana

He was also involved in organising the Medu exhibition in 1982 (Botswana), 2008 (Johannesburg Art Gallery), and 2009 (Botswana).  Albio Gonzalez produced the very first Medu poster for the theatre units production play Marumo, written by Mandla Langa to commemorate the historical battle of Isandlwana, which had taken place exactly 150 years before. The story of the heroic Zulu victory over the British occupation was used to motivate people in their present situation of oppression. Albio’s poster design integrated a British army helmet with a spear and an AK 47 assault rifle. Albio has contributed most of his works to Freedom Park and he is helping us to collect more from people who were involved.

On 1 September 2016 Albio donated others collections. PAA is still in discussion to determine how these collections will be brought from Sweden to South Africa: