Mimeograph transcripts of 16 days of hearings (25 Sept.-13 Oct. 1961) by a Commission of Inquiry on civil disturbances which ensued following voting on June 1,1961 to elect 23 members of the Legislative Council in the British Protectorate of Zanzibar. 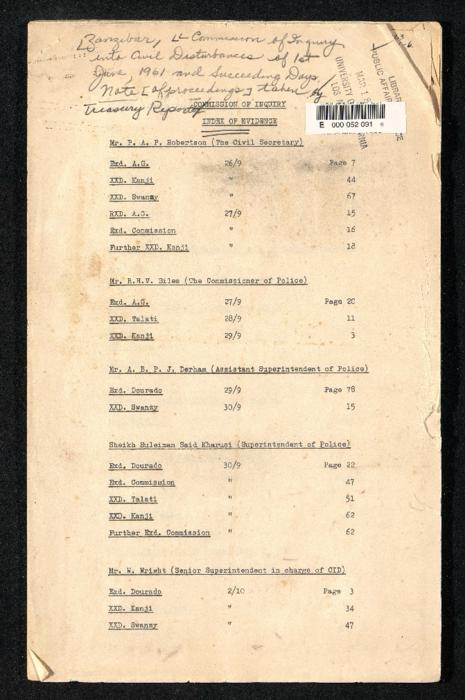 Read the Zanzibar Protectorate Commission of Inquiry into Civil Disturbances

According to Lawrence E.Y. Mbogoni in his Aspects of colonial Tanzania history (Dar es Salaam, Tanzania: Mkuki na Nyota Publishers, c2013, pages 189-190), on the morning of June 1, 1961, with voting still in progress, "disturbances broke out in Zanzibar town, spread to the rural areas of the island on 2 June, and continued, mainly in the central and northern areas of Zanzibar, until the security forces gained control of the situation on 8 June. As a result of these disturbances, sixty eight people were killed and 381 injured. Many of those killed were 'Manga' Arabs living in rural areas of Zanzibar Island. On 8 September 1961, the British Resident, Sir George Mooring, appointed a Commission of Inquiry...composed of Sir Stafford Foster-Sutton, legal counsel and chairman, Sir Vincent Tewson, and Caryll Archibald Grossmith, Esquire, commissioners." If this collection contains your copyrighted content, please see our Take Down Requests page.

If this collection contains your copyrighted content, please see our Take Down Requests page.