Pro-apartheid comics published on behalf of the South African government

Afri-Comics were published in 1975-1977 as part of a “five-year secret propaganda war” led by Eschel Rhoodie, Secretary of the Department of Information in the South African government from 1972 until 1977, to defend apartheid. 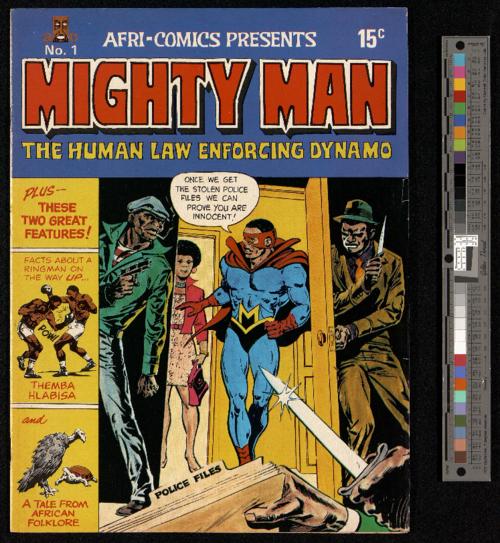 The company was established in 1975 by Rhoodie using a South African business partner, Jan van Zyl Alberts, as a front to disguise government participation. Afri-Comics published two titles, Mighty Man and Tiger Ingwe, in large press runs, 47,000 copies a month at 15 cents each for Mighty Man, and 43,000 monthly for Tiger Ingwe, and aimed, in the words of one of Rhoodie’s US collaborators, “to help educate the black man in the ways of Western society, social concerns and free enterprise.”

Few if any of the target audience were fooled. During and after the Soweto student uprising Africans “’’burned down the newsstands … They threw the things on the ground, and we [the US publisher] had to stop publishing them.’” Very few copies of the comics remain in existence. The digital collection at UCLA, based on hard copies collected by Professor William H. Worger, and scanned material contributed by a number of comic book enthusiasts, is the only publicly accessble online library collection currently known of this material in the world.

Afri-Comics were published in the mid-1970s as part of an initiative led by Eschel Rhoodie, Secretary of the Department of Information in the South African government from 1972 until 1977. With the approval of the Prime Minister of South Africa, John Vorster, and in collaboration with General H. J. van den Bergh, the head of the South African Bureau of State Security (B.O.S.S), Rhoodie embarked on a “five-year secret propaganda war” against internal and external critics of apartheid (Rhoodie 1983: 280). The most well known part of this propaganda campaign was an attempt to influence US news media, especially through a surreptitious and failed 1975 attempt by US based allies led by “a conservative Republican fund-raiser, entrepreneur and onetime owner of a string of small radio stations and newspapers,” John McGoff, and funded by the South African government, to purchase the now defunct Washington Star (1852-1981) and turn it into a pro-apartheid organ (McGoff obituary New York Times February 4, 1998).

Information about the propaganda campaign leaked out to the press in the aftermath of the 1976 student uprising in South Africa leading to Eschel Rhoodie fleeing South Africa in the face of charges of misappropriating state funds (he was later charged, sentenced to a six year prison term, which was reversed on appeal, and departed permanently for the United States where he lived until his death in 1993). Rhoodie’s immediate boss, Information Minister Connie Mulder, and John Vorster, prime minster of South Africa 1968-1978 and president 1978-1979, both resigned in disgrace as a result of the scandal which was known as “Muldergate.”(Rhoodie 1983; Rees and Day 1980).[1]

Afri-Comics is a much less well-known component of South Africa’s propaganda campaign. The company was established in 1975 by Rhoodie using a South African business       partner, Jan van Zyl Alberts, as a front to disguise government participation. According to Rhoodie’s own account:

Alberts received instructions from us to establish a company, Afri-Comics, which had to produce typical American-style comics for mass distribution. The objective was to counter Communist and Swapo propaganda among South African Blacks and to promote not only the concept of law and order but also a love for their own history and culture. It was an idea which I had picked up from friends in the CIA who had several major comic strips in the West and who had also produced comic books for distribution in the Middle and Far East.

Two major characters were selected to be the heroes of the comic strips: Tiger Ingwe and Mighty Man [subtitled The Human Law Enforcing Dynamo]. The story line was written by Albert’s wife Bettie, who is a trained anthropologist and also by writers in the United States [Joe Orlando, who had drawn Superman, and John Albano, both moonlighting from D.C. Comics]. The art work was done in New York through Richard Manville Inc. This was the same market research company which conducted the world-wide secret market analysis on South Africa’s image in 1973, and which I used as the basis in preparing the Government’s five-year propaganda campaign.

The American artists had to be carefully watched for their Black figures tended to look and act like American Negroes. Alberts and his wife met with the artists in New York and with the use of books, illustrations and other material from South Africa, they finally succeeded in getting the right kind of illustration.

Tiger Ingwe was a great hit. Bettie Alberts picked the tiger because to the Black man in South Africa, no matter whether he is Zulu or Tswana, the tiger is the symbol of cleverness, an animal who could think and who planned his moves. Tiger Ingwe used his powers not to kill or maim, but to help. All over South Africa the Black readers readily identified themselves with Tiger Ingwe. He was the hero of the rural Black man, of the Black man in the homelands. Mighty Man was the character who fascinated the Black man and his family in the cities and the bigger towns. He was an ex-policeman who acted somewhat like the Phantom and who sought out for punishment those criminals who robbed the poor or who threatened their lives.

Creating the right character for a comic series which cost hundreds of thousands of Rand per year was not easy, but Bettie van Zyl Alberts solved this problem by spending weeks in the company of Black school children, young adults, Black workers in various parts of the country, housewives and even businessmen and students to ascertain their taste for entertainment. She spent months researching literature by anthropologists and missionaries to gather material for the story line used in the comics. In every story there was a moral, a reference to the Black man’s tradition. Strangely enough, although there are no tigers in South Africa, or anywhere else in Africa for that matter, Bettie van Zyl Alberts found that every language group among the Nguni and Sotho races had a name for a tiger (Rhoodie 1983: 281-282).

After working with Jan and Bettie van Zyl Alberts to launch Afri-Comics, Rhoodie embarked on several other initiatives, especially

the establishment of an entire Black film industry, not only for the production of films but also for its distribution. What the Government had in mind was to influence popular opinion among Blacks in the same way Hollywood was used during the wartime to propagate the American cause. The targets were laudable: to give the Black man his own heroes instead of John Wayne from the United States; to cultivate a love for his own music and his own culture instead of the Beatles; to subtly counter communist influence; and to promote free enterprise … Thus, Project Hollywood was born. Heyns Films was the production arm of the project” (Rhoodie, 1983: 283).

Contemporaneous accounts of the origins of Mighty Man suggest additional US input apart from the CIA comics which first inspired Rhoodie. A story published in the June 14, 1976, issue of Newsweek, authored by writers based in Johannesburg and Detroit (the latter John McGoff’s home town), reported that “According to Richard Manville, a New York marketing consultant who produces the strips, Mighty Man is ‘modelled textually and philosophically on Superman,’ and carries a strong law-and-order message to South African blacks” (Willenson, Younghusband, and Manning 1976).  In an article published at the beginning of 1978, Steve Weissman wrote that “A New York marketing consultant with clients in South Africa, [Richard] Manville thought of the comic back in 1975. ‘It was a deliberate copy of a highly successful format – namely Superman – which had been working for 25 years.’ Only Mighty Man – with blue tights and scarlet cape – was a South African black, and Manville and his team of freelance cartoonists and balloon writers set the stories in a black township very like the now famous Soweto” (Weissman 1978).[2] The aim of the series, according to John McGoff, was to “help educate the black man in the ways of Western society, social concerns and free enterprise”(Newsweek 1976).

According to Newsweek, “Manville and fifteen American artists” produced Mighty Man and Tiger Ingwe (Newsweek 1976). The lead artist for Mighty Man was Joe Orlando, whose first publication after coming to the United States as a two-year-old from Italy, was an illustrated edition of Mark Twain’s The Prince and the Pauper. Later in his career Orlando drew some of the Superman comics and became vice president of D.C. Comics. At some point, Afri-Comics “switched from American-made productions to English art” (Mantlo 1978).[3]

In addition to Mighty Man and Tiger Ingwe, Afri-Comics also published a number of other titles, most of them individual items rather than series, such as Witch Doctor’s Cave, and Shaka’s Love Pampata.

Mighty Man and Tiger Ingwe were published in large press runs, 47,000 copies monthly at 15 cents each for Mighty Man, and 43,000 monthly for Tiger Ingwe. Almost none remain. The digital collection at UCLA, based on hard copies collected by Professor William H. Worger, and scanned material contributed by a number of comic book enthusiasts, is the only library collection currently known of this material in the world. According to Steve Weissman’s 1978 article, by the end of the Soweto uprising “Mighty Man is dead, zapped in Soweto by the very people he claimed to defend.” Weissman quoted Rhoodie’s US based publicist, Richard Manville, on the end of the comics: “’’They burned down the newsstands,’ complains the strip’s US creator Richard Manville. ‘They threw the things on the ground, and we had to stop publishing them’” (Weissman 1978).

[3] Mantlo’s account is based on his own correspondence with Afri-Comics, and on the 1976 Newsweek story and the January-February 1978 Weissman article.